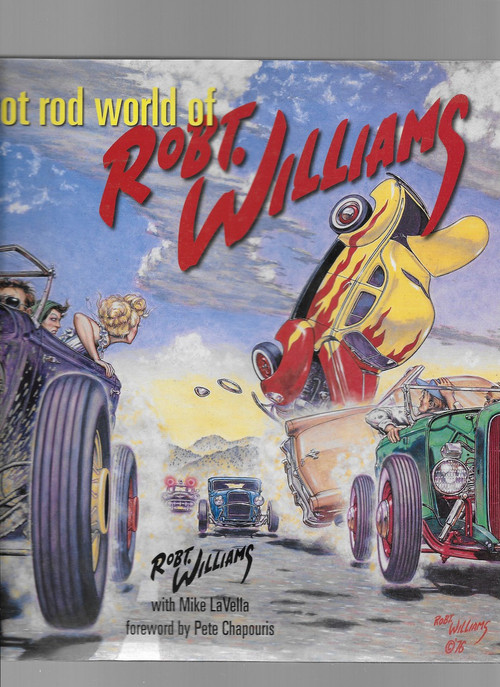 Robert Williams' life and work have proven difficult to describe. Who better then, to put Williams into words and pictures than the man himself-as he does in this illustrated autobiography of his life in hot rods. Here, for the first time, Robert Williams presents his extraordinary body of work in the context of his hot rod background, in the process relating his impossibly wild formative years and his gradual establishment as one of America's most influential underground artists. Born in 1943 and raised in Alabama and Albuquerque, Williams eventually gravitated to Southern California and the Chouinard Art Institute, but not before immersing himself in the country’s nascent youth culture of hot rods, rock ’n’ roll, and bowling alley rumbles. He recounts a boyhood spent in drive-in theaters and dirt tracks, honing a life and a style that had little to do with the world of square day jobs he entered after leaving Chouinard in 1963, when, through sheer happenstance, an unemployment agency handed him a job as art director at the studio of his hero, Ed ""Big Daddy"" Roth. Along with tales from his time at Roth studios—which resulted in his famous Roth ads for Hot Rod magazine, not to mention several infamous run-ins with the Hell’s Angels—Williams demythologizes the 1950s, recalls his association with Zap Comix and R. Crumb, and reflects on today’s retro rodders and his own hot rods. Illustrated throughout with photographs from Williams’ personal collection as well as paintings and illustrations, this is a life portrait as only Robert Williams could do it.

This product hasn't received any reviews yet. Be the first to review this product!